Route 66 from Santa Fe thru Albuquerque to Gallup, NM

One of our favorite segments of the Mother Road is from Santa Fe through Albuquerque and westward to Gallup, New Mexico.

Santa Fe was one of the larger cities on Route 66 during its earlier alignments. The Mother Road passed through downtown near the historic LaFonda on the Plaza Hotel.

Santa Fe remained on the original Route 66 until 1938 when the road was rerouted on a more direct route to Albuquerque from the Santa Rosa area.

Map of Route 66 from Santa Fe thru Albuquerque to Gallup, New Mexico 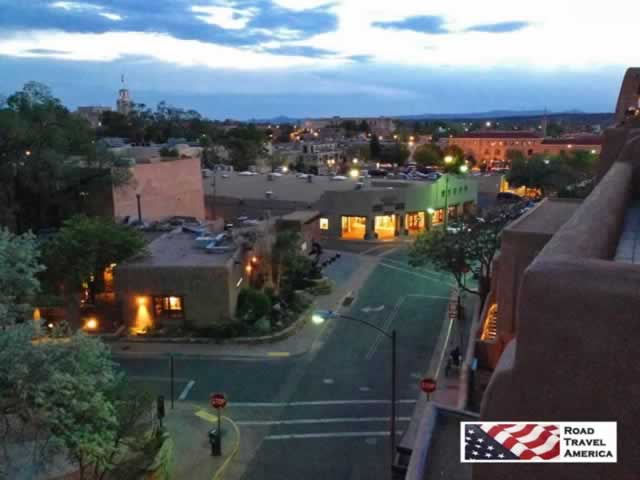 In Santa Fe, Route 66 traveled along the Old Santa Fe Trail, passing the San Miguel Mission and Loretto Chapel and across the Santa Fe River to the historic LaFonda on the Plaza Hotel.

From there it turned west on Water Street, and then left onto Galisteo Street and Cerrillos Road southward towards Albuquerque as shown in the map above.

The old route then passed the School for the Deaf and lodging properties like the El Rey Inn. Outside of town Route 66 followed the course of the Camino Real.

About 15 miles to the south, Route 66 made the steep, 500-foot descent down the La Bajada precipice in only two miles via a series of  26 switchbacks with a 28% grade.

Remnants of the swtichbacks and their scar on the earth can still be seen by hikers and those in high-clearance, 4-wheel drive vehicles, and from satellite photos like the one shown to the right.

In 1932 Route 66 was moved about three miles to the east near the current route of Interstate 25.

The first route alignment of 1926-1937 ran north-south through Albuquerque.

Dozens of motels, cafes, gift shops and restaurants spring up along the route.

Today, the fastest route between Santa Fe and Albuquerque is I-25, a distance of about 65 miles. An alternate route is on the Turquoise Trail, Highway 14, through the quaint villages of Cerillos and Madrid.

Some of these vintage motels remain, and historic neon signs still glow on old Route 66 through Albuquerque, now Central Avenue.

Tourism is a big industry in Albuquerque, hosting events such as the International Balloon Fiesta.

It offers a variety of things to do such as the Sandia Peak Tramway, Indian Pueblo Cultural Center, National Museum of Nuclear History, San Felipe de Neri Church and Albuquerque Old Town.

The original length of Route 66 in New Mexico in 1926 was about 507 miles. Funding for a straighter, shorter route was approved in 1931.

With realignments and road improvements, the distance of Route 66 in New Mexico was reduced to 399 miles by 1937. The longest sections of the 1926 alignment created a large "S Curve" as it headed north to Santa Fe through Tecolate, Bernai, San Jose, Pecos and Glorieta Pass, and then back south to Albuquerque, as shown in the map below.

The 1926 alignment came into Albuquerque from the north on Highway 313, and ran through downtown along 4th Street. Today the Barelas-South Fourth Street Historic District just south of downtown is a popular attraction, with shops, restaurants and other businesses.

Route 66 then continued south to Los Lunas, where it turned west to Laguna.

This aligment was replaced in 1937 with a more direct westward route from Albuquerque to Laguna, and beyond to Gallup, following the current route of I-40 in many locales. Route 66 passed through downtown Albuquerque, running west-to-east on Central Avenue.

Vintage Views along the way in Albuquerque

The City of Grants is located in Cibola County, roughly half-way between present -day Albuquerque and Gallup on Interstate 40.

Grants offers visitors a wealth of historical and recreational activities, despite being only two exits long.

Several other attractions are located in the city, such as the New Mexico Mining Museum and the Route 66 Vintage Museum & Double Six Gallery. Nearby is the La Ventana Arch in the El Malpais National Conservation Area.

Gallup is the largest city between Albuquerque and Flagstaff, and has a population of about 22,000 residents.

The city sits at an elevation of 6,512', and is known as the "most patriotic small town in America".

It is located about 140 miles west of Albuquerque, and 185 miles east of Flagstaff, and only 23 miles from the Arizona-New Mexico border.

The city is located in the middle of the Navajo Reservation.

The city was founded in 1881 as a railhead for the Atlantic and Pacific Railroad, and named after David Gallup, a paymaster for the railroad.

The railroad today remains an important industry in the city.

Because of the nearby rugged terrain, it was a popular location in the 1940s and 1950s for Hollywood Westerns and has hosted many well-known movie stars such as John Wayne, Katharine Hepburn, Humphrey Bogart, Ronald Reagan and Kirk Douglas.

Restaurants such as the famous El Rancho reflect the western and Indian influences on the town. Today’s visitors can partake in a meal at the El Rancho or enjoy an overnight stay and tour the memorabilia-lined grand lobby.

Gallup has over 30 hotels and over 90 restaurants and is a popular stopover point for those traveling Historic Route 66.

We have included below a sampling of our collection of vintage travel postcards dealing with Gallup and Route 66. These portray the historic road in its prime and help us to visualize "yesterday" as we drive Route 66 today.

Travel Guides for Other Segments of Route 66