Route 66, the Mother Road, ran southwest out of Kingman through Cool Springs to Oatman, and onward to Golden Shores and Topock where it turned west to Needles, California.

The Mother Road then passed through cities and towns like these as it made its way westbound across California:

Leaving Needles, the road ventured a bit north, through Goffs. This railroad town remained a stop on Route 66 until 1931, when a more direct alignment between Needles and Essex was opened.

The road then headed south, through Chambless and Amboy, and then west to Ludlow, Newberry Springs and on to Barstow. There it turned south and travled through Helendale, Victorville, through the Cajon Pass, and on to San Bernadino. A final westward track through Pasadena took the Mother Road to its final end, near Santa Monica.

In 1940 the first freeway in Los Angeles was included as part of U.S. 66, the Arroyo Seco Parkway, later known as the Pasadena Freeway.

The highway is now mostly replaced with several streets in Los Angeles, State Route 66 (SR 66), Interstate 15 (I-15) and I-40. The route ended near the famed Santa Monica Pier in the Los Angeles area.

This road trip features some of our favorite places and scenes along the Mother Road.

The route includes all of the best of Route 66, including drivable sections, ghost towns, classic motels and famous roadside attractions like the Wigwam Motel.

Shown below are highlights of a Route 66 trip westbound from Needles to Santa Monica, with both present-day photos and vintage travel postcards. 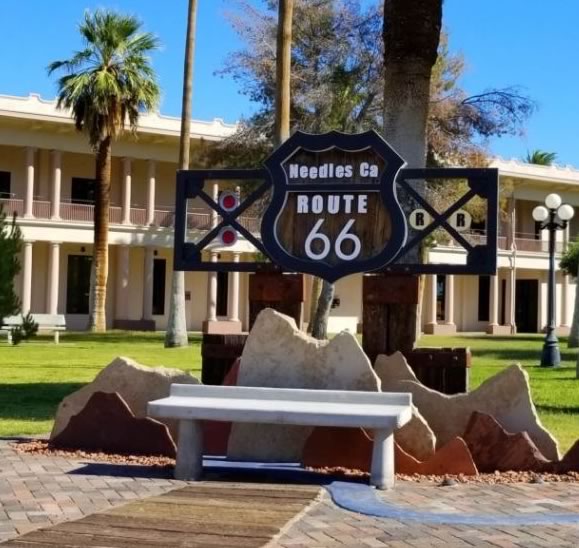 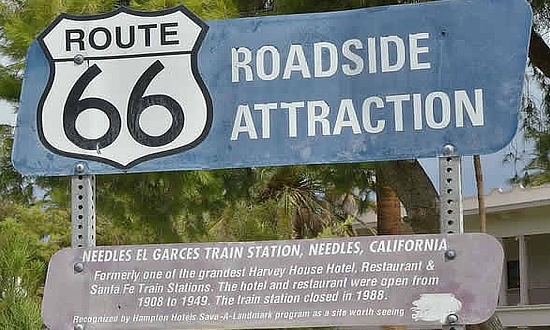 Roy's Motel and Cafe in Amboy, California, on Route 66 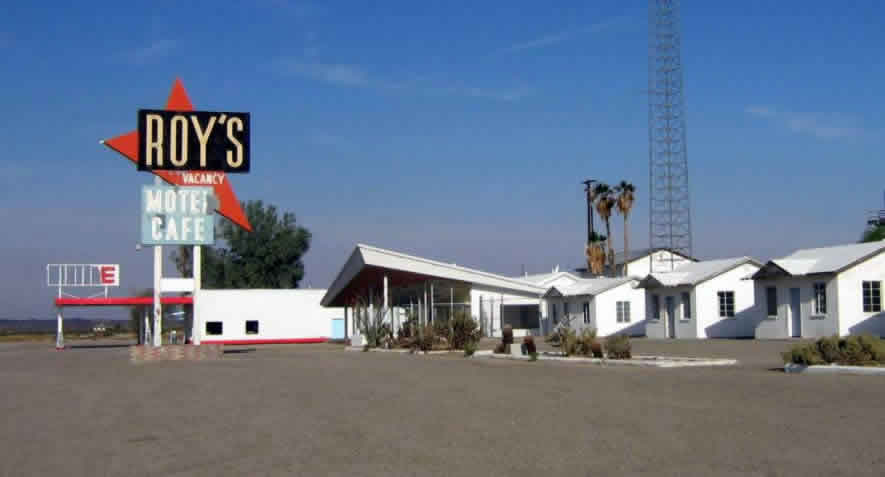 Time for a stop on a hot day of bike riding ... at Roy's Motel and Cafe in Amboy, California

An area attraction: the Amboy Crater National Natural Landmark
The Amboy Crater is an an extinct, 79,000 year old volcano, located about 1.5 miles south of Route 66. 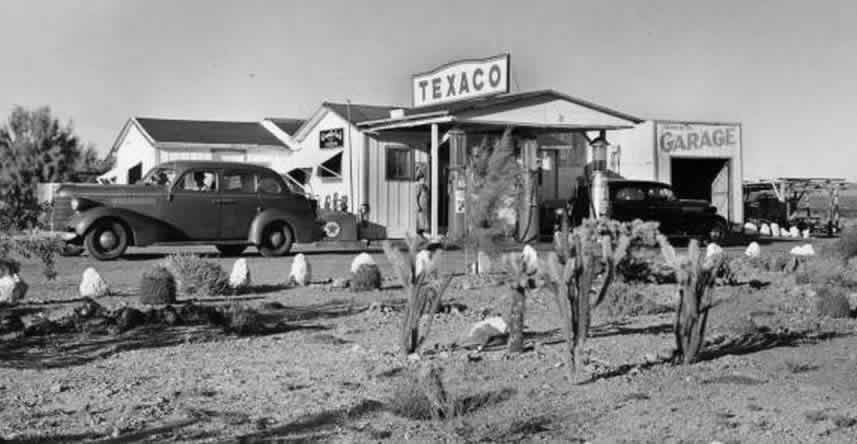 Route 66 Roadside Attraction: Bagdad Cafe, Newberry Springs, California
Originally built in the 1950s, this world-famous restaurant was the location of the 1988 film "Bagdad Cafe" which became the new name of the restaurant in 1995. 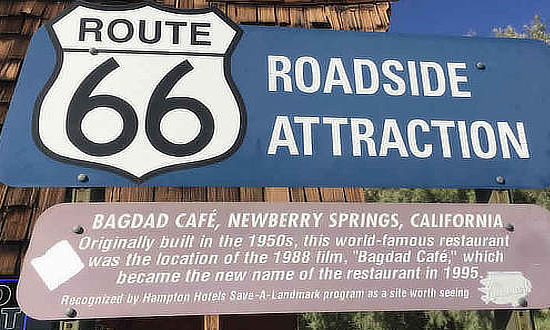 The Bagdad Cafe in California 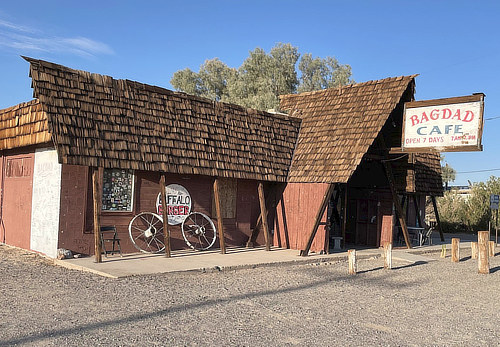 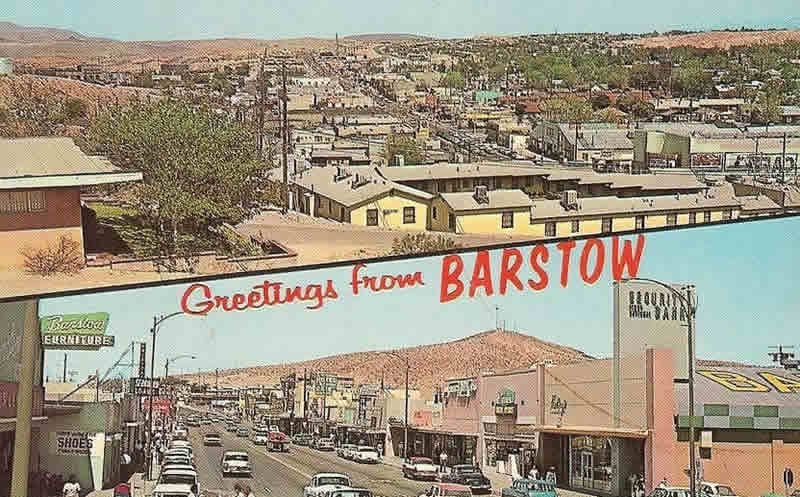 Barstow has a number of well known murals around the city, including this one 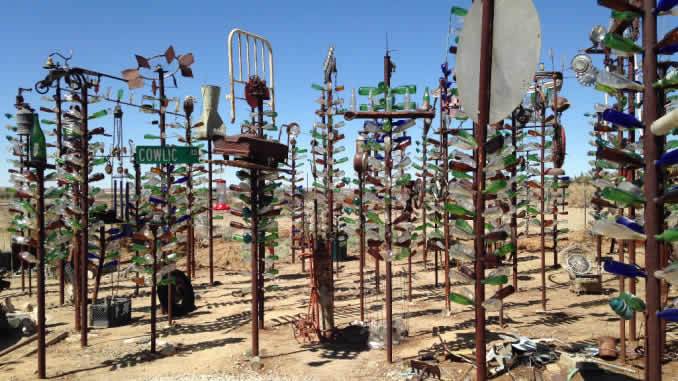 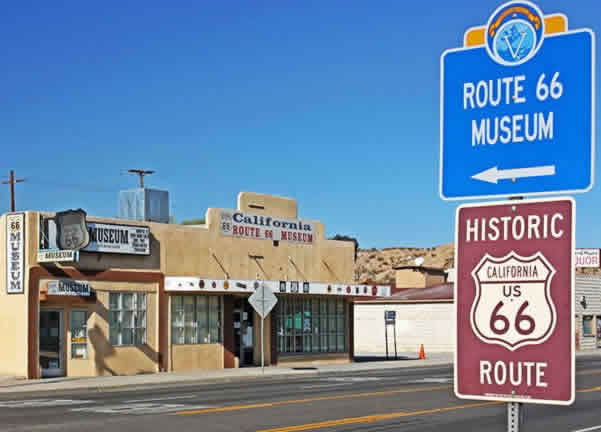 Mural at the California Route 66 Museum in Victorville, California 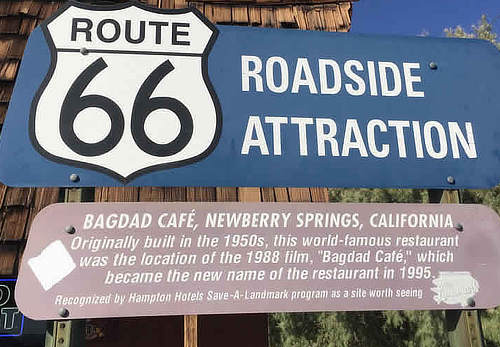 Earlier days of Route 66 through Cajon Pass ... the highest point on CA Route 66
The pass is located between the San Bernardino Mountains and the San Gabriel Mountains 6 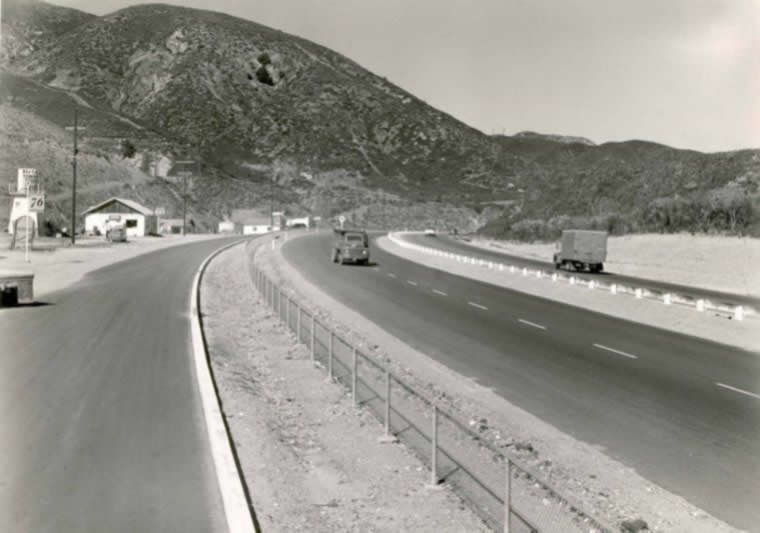 The original terminus of U.S. Route 66 was at 7th and Broadway in downtown Los Angeles. However, over the years, and decades, Route 66 has had several “official” and “unofficial" ending points.

The route was later extended to the intersection of Lincoln and Olympic boulevards in Santa Monica, about one mile from the Pacific Ocean. This is often referred to as the official ending point of Route 66.

Since this locale can be disappointing after the long journey from Chicago, the Route 66 Alliance partnered with the Santa Monica Pier Restoration Corporation in 2009 to mount an unofficial “End of the Trail” sign on the pier, seen below in 2020.

Classic Motels Along Route 66 in California

California has always been a popular destination for tourists and those migrating to the Far West.

During the 1930s, as automobiles became a more dominant and affordable means of transportation, and more highways like Route 66 were constructed, tourist courts were built, offering the privacy and comfort of a one-room accommodation.

Whether they were called courts, cottages, cabins, or lodges, they offered similar amenities.

Gradually a newer, but similar, concept evolved: the motel, between an auto tourist camp and the traditional downtown hotel.

And many adopted the "art deco" theme popular at the time.

Included here are several motels from the earlier days of Route 66 in California which exhibit the typical lodging colors, textures and designs of that era.