We've had the opportunity to get out on the road and explore Route 66 numerous times in Illinois, Missouri, Oklahoma, Texas, New Mexico, Arizona and California.

Driving time today to travel the 280 miles from Amarillo to Santa Fe is about four hours via I-40 to Cline's Corners, and then north on U.S. 285.

The Amarillo to Santa Fe trip could easily be stretched to two days or more, depending on the length of your stops, and your stopovers at night.

We have the trip across New Mexico Route 66 westbound divided into two major segments ... select your area of interest for more details!

Map showing towns along U.S. Route 66 across New Mexico, from Tucumcari to Gallup

Just East of Tucumcari: The Ghost Town of Glenrio

Sitting directly on the Texas - New Mexico border at Exit 0 is the abandoned ghost town of Glenrio. The townsite still has noticeable traces of Route 66 and the motels and restaurants that used to thrive there before the arrival of I-40. Just west of Glenrio, Route 66 bridges are still visible to the alert I-40 traveler.

Today it includes the Glenrio Historic District listed on the National Register of Historic Places in 2007. The district emcompasses the Route 66 roadbed and 17 abandoned structures.

Leaving Glenrio, and back on I-40, we drive 42 miles and arrive at Tucumcari with its variety of vintage motels and electric neon signage. One of the more famous hotels here is the Blue Swallow Motel.

For many years, Tucumcari has been a popular stop for cross-country travelers on Interstate 40 and previously Route 66.

Today, Old U.S. Route 66 runs through the heart of Tucumcari via Route 66 Boulevard. Numerous businesses, including gasoline service stations, restaurants and motels, were constructed to accommodate tourists as they traveled through on the Mother Road.

And Tucumcari is known for its murals painted on area buildings; more than twenty have been painted thus far.

As we leave Tucumcari, we head west again, for 41 miles. Cuervo, New Mexico is an old Chicago, Rock Island and Gulf Railroad town that today is mostly abandoned, although some residents still live there.

The railroad siding was built in 1902 and named "Cuervo". The post office was opened that same year.

Most of the town is on the south side of I-40, between the interstate and the hills to the south. A variety of old buildings, houses and churches survive today. A ghost town? Not quite, but close! 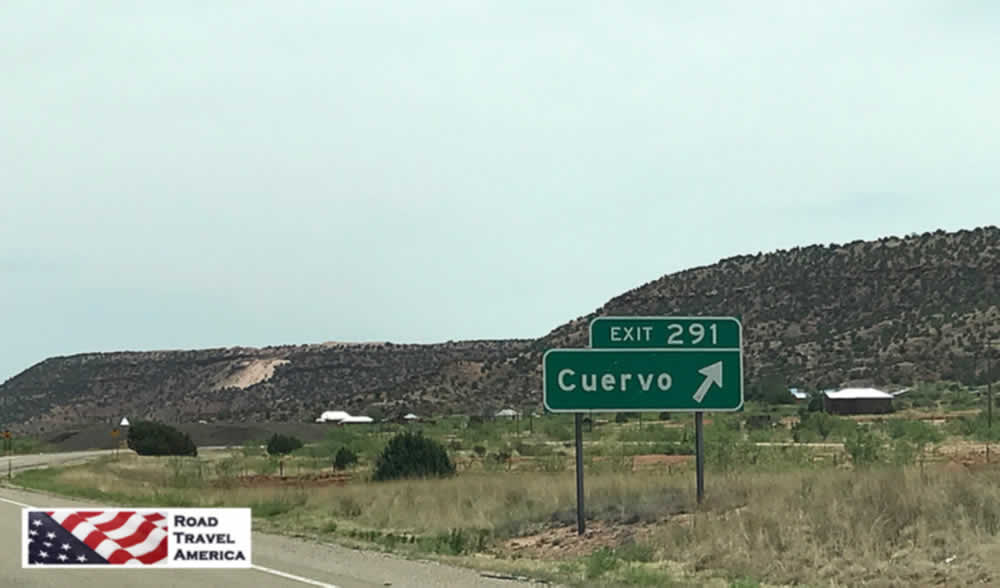 A Stopover in Santa Rosa

Only 18 more miles and we find ourselves in Santa Rosa.

When Route 66 passed through Santa Rosa in 1930, numerous service stations, cafés and motor courts were built to accommodate motorists traveling the Mother Road.

Today, visitors still see an assortment of buildings and signs that take one back to those glory days of Historic Route 66 in Santa Rosa.

One of the popular local attractions is the Route 66 Auto Museum, which draws car buffs from all over the country and beyond. The museum houses a large collection of classics, low riders, muscle cars and motorcycles … plus, gas pumps and other auto memorabilia from the early days of Route 66.

Nearby Santa Rosa Lake State Park is the place to be for camping, boating, water skiing, jet skiing, swimming, hiking, biking and so much more!

Santa Rosa offers a variety of hotels, inns, RV parks and campsites for visitors to the area.

Approximately 507 miles long in 1926, the alignment of Route 66 in New Mexico was reduced to 399 miles by 1937. The longest sections of the initial alignment created a large "S curve" as the road stretched across the middle of the state.

Aligning with U.S. 85, Route 66 followed the corridor of the old Santa Fe Trail and its successor, the Santa Fe Railroad, and passed through the villages of Tecolote, Bernal, San Jose, Rowe and Pecos. Skirting the tourist facilities at Pigeon’s Ranch, the highway climbed Glorieta Pass and descended the narrow defile at Cañoncito, where it diverged from the railroad alignment to veer toward Santa Fe.

Once in Santa Fe, Route 66 passed through the heart of downtown, along side the historic LaFonda on the Plaza Hotel.

We have stayed multiple times at LaFonda and it has become our favorite lodging choice in Santa Fe!

The Santa Fe Trail was a 19th-century transportation route through central North America that connected Independence, Missouri with Santa Fe. It served as a vital commercial highway until the introduction of the railroad to Santa Fe in 1880. Santa Fe was also near the end of the El Camino Real de Tierra Adentro which carried trade from Mexico City.

Santa Fe remained on the original Route 66 until 1938 when the road was rerouted on a more direct route thru Cline's Corners to Albuquerque ... see map below showing both the 1926 and post-1937 alignments in central New Mexico.

Today, Santa Fe is located on Interstate Highway 25, about 65 miles northeast of Albuquerque. U.S. Highway 285 traverses with city in a north-south orientation. Santa Fe is the capitol city of New Mexico, and is positioned at 7,000 feet above sea level.

A popular attraction in downtown Santa Fe ... the Cathedral Basilica of St. Francis of Assisi 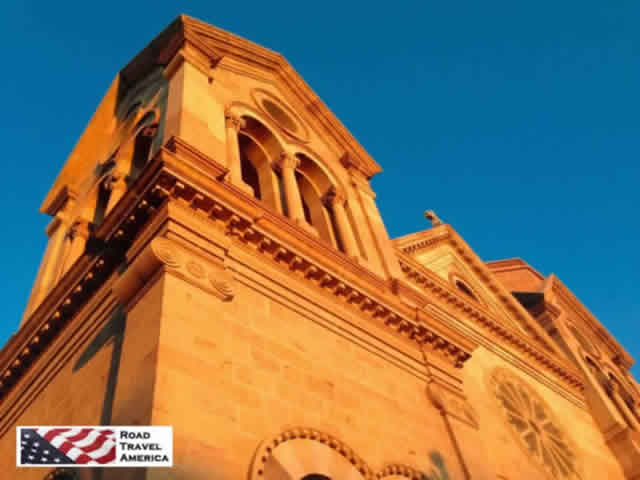 Lodging Options Along Route 66 from Amarillo to Santa Fe

Santa Fe remained on the original Route 66 until 1938 when the road was rerouted on a more direct route to Albuquerque.

The first route alignment of 1926-1937 ran north-south through Albuquerque.

Dozens of motels, cafes, gift shops and restaurants spring up along the route.

At Albuquerque, a final turn west took the Mother Road to Gallup and then into Arizona.

Today, the fastest route between Santa Fe and Albuquerque is I-25, a distance of about 65 miles.

An alternate route is on the Turquoise Trail, Highway 14, through the quaint villages of Cerillos and Madrid.

Some of these vintage motels remain, and historic neon signs still glow on old Route 66 through Albuquerque, now Central Avenue.

Tourism is a big industry in Albuquerque, hosting events such as the International Balloon Fiesta.

It offers a variety of things to do such as the Sandia Peak Tramway, Indian Pueblo Cultural Center, National Museum of Nuclear History, San Felipe de Neri Church and Albuquerque Old Town.

Gallup is the largest city between Albuquerque and Flagstaff, and has a population of about 22,000 residents.

The city sits at an elevation of 6,512', and is known as the "most patriotic small town in America".

It is located about 140 miles west of Albuquerque, and 185 miles east of Flagstaff, and only 23 miles from the Arizona-New Mexico border.

The city is located in the middle of the Navajo Reservation.

The city was founded in 1881 as a railhead for the Atlantic and Pacific Railroad, and named after David Gallup, a paymaster for the railroad.

The railroad today remains an important industry in the city.

Because of the nearby rugged terrain, it was a popular location in the 1940s and 1950s for Hollywood Westerns and has hosted many well-known movie stars such as John Wayne, Katharine Hepburn, Humphrey Bogart, Ronald Reagan and Kirk Douglas.

Restaurants such as the famous El Rancho reflect the western and Indian influences on the town.

Today’s visitors can partake in a meal at the El Rancho or enjoy an overnight stay and tour the memorabilia-lined grand lobby.

Gallup has over 30 hotels and over 90 restaurants and is a popular stopover point for those traveling Historic Route 66.

We have included below a sampling of our collection of vintage travel postcards dealing with Gallup and Route 66. These portray the historic road in its prime and help us to visualize "yesterday" as we drive Route 66 today.

The famous Clines Corners is located at the intersection of I-40 and U.S. 285, 68 miles east of Albuquerque, at Exit 218. It offers gasoline, a restaurant, souvenirs and gift shop, large clean restrooms, RV park, and more! It's always worth a stop.

Roy Cline opened his rest stop in 1934 at the intersection of what was then New Mexico State Highways 6 and 2.

For decades since, travelers have stopped at Clines Corners for a needed break,  fuel, or just their homemade fudge. Today, Clines Corners Retail Center spans over 30,000 square feet.