The original 1926 Route 66 alignment created a large "S Curve" in New Mexico as it headed north to Santa Fe through Tecolate, Bernai, San Jose, Pecos and Glorieta Pass, and then back south to Albuquerque.

The 1926 alignment came into Albuquerque from Santa Fe on Highway 313, and ran through downtown north-to-south along 4th Street. Today the Barelas-South Fourth Street Historic District just south of downtown is a popular attraction, with shops, restaurants and other businesses.

Route 66 then continued south to Los Lunas, where it turned west to Laguna.

The 1926 alignment was replaced in 1937 with a more direct westward route into Albuquerque along Central Avenue, and then from Albuquerque directly to Laguna, and beyond to Gallup, following the current route of I-40 in many locales.

With realignments and road improvements, the distance of Route 66 in New Mexico was reduced to 399 miles by 1937.

Dozens of motels, cafes, gift shops and restaurants spring up along the route in Albuquerque. Some of these vintage motels remain, and historic neon signs still glow on old Route 66 through Albuquerque, now Central Avenue.

Tourism, Attractions and the Route 66 Connections

Tourism is a big industry in Albuquerque, hosting large numbers of Route 66 travelers and events such as the International Balloon Fiesta.

Home to eclectic shops and unique restaurants, Route 66 in Albuquerque is adorned with buzzing neon signs, vintage artifacts, and epitomizes the unique ABQ attitude. Visitors can experience an authentic fusion of old and new along Route 66 in Nob Hill, the University area, Downtown, and Historic Old Town.

Central Avenue underwent several transformations that have molded it into the main Albuquerque street that it is today. Present-day Central Avenue connects locals and visitors to the city’s diverse neighborhoods, each offering unique and authentic Albuquerque experiences.

Old Town is the historic heart of Albuquerque, featuring San Felipe de Neri Church, the oldest building in the city, unique museums, and more than more than 100 stores and 24 galleries.

Downtown has gradually transformed into an arts and entertainment district with a variety of bars, restaurants, galleries, and live music venues, as well as new residential space. Here visitors will find bustling nightlife along Central Avenue (former Route 66), including many nightclubs, theaters and restaurants. The Albuquerque Convention Center is located downtown and is close to several major hotels.

The city offers a variety of attractions and things to do for Route 66 travelers such as:

Bernalillo County and the City of Albuquerque are developing the 21,000sqft Route 66 Visitor Center to be located at 12200 Central Avenue, atop Nine Mile Hill, near Atrisco Vista and I-40.

It will capitalize on the historic nature of the U.S. Route 66 and encourage motorists to get off the interstate to learn all about the city's heritage with the old road.

The $12 million multi-use facility will also house the New Mexico Music Hall of Fame, a taproom, gift shop and be available for special events. The outdoor market areas, including the parking lot, will be utilized for a makeshift drive-in theater, car shows, artisan pop ups, and other outdoor events. It is scheduled to open in the first quarter of 2023.

Albuquerque Travel Guide at TripAdvisor: Hotels, restaurants, things to do

Today, the fastest route between Santa Fe and Albuquerque is I-25, a distance of about 65 miles. An alternate route is on the Turquoise Trail, Highway 14, through the quaint villages of Cerrillos and Madrid

In earlier times Route 66 was the primary road northward to Santa Fe.

North of Albuquerque, Route 66 headed for Santa Fe and made the steep, 500-foot ascent up the La Bajada precipice in only two miles via a series of  26 switchbacks with a 28% grade.

Remnants of the swtichbacks and their scar on the earth can still be seen by hikers and those in high-clearance, 4-wheel drive vehicles, and from satellite photos like the one shown to the right.

In 1932 Route 66 was moved about three miles to the east near the current route of Interstate 25.

South of La Bajada between Santa Fe and Albuquerque was the "Big Cut". Located near the present-day San Felipe Pueblo, this was an engineering marvel when it was completed in 1909 as part of New Mexico's Route 1. Route 66 passed through the notch from 1926 to 1931.

It consisted of a 75-foot long, 60-foot deep cut in Gravel Hill in the foothills of the Sandia Mountains made by hard working construction workers with dynamite, picks and shovels. The 18-foot wide roadway was no longer used when Route 66 was realigned in 1931.

Remnants of the cut can still be seen from southbound I-25 at Exit 252 in back of the casinos on the east side of the interstate.

Map of Route 66 from Albuquerque to Santa Fe, New Mexico 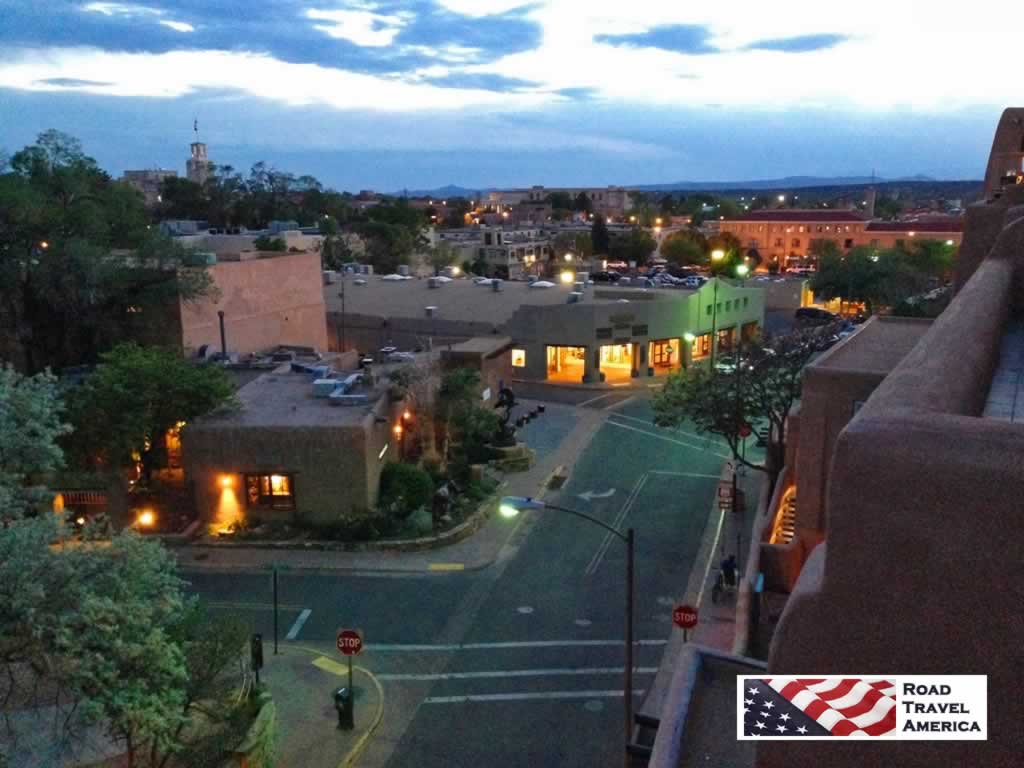 Travel Guides for Other Segments of Route 66