Route 66 was one of the United State's first continuous stretches of paved highway, and served as a major path for those who migrated west.

"The Mother Road" became one of the most famous roads in the United States, outdistancing others such as the Lincoln Highway.

The movie "Easy Rider" was filmed at several locations along Route 66. The move "Thelma and Louise" also featured Route 66 references and scenes.

It is popular lore in movies, songs, books like "The Grapes of Wrath", and TV shows.

The popularity stuck, and continues to grow today!

A popular television show during the early 1960s bore the road's name: "Route 66". Starring George Maharis as Buz, and Martin Milner as Tod, the two young adventurers drove the road in their Chevrolet Corvette for 116 episodes. It ran on Friday nights on CBS Television.

In 1963, Glenn Corbett joined the series, playing the part of Lincoln "Linc" Case.

Despite the name of the series, most episodes did NOT take place on the historic road, but in 25 different U.S. states, mostly on location. TV viewers were treated to episodes filmed in Carson City, Los Angeles, Toronto, Santa Fe, Reno, Tucson, Dallas and many more locales.

Martin Milner starred as Tod Stiles, a recent college graduate with no future prospects due to circumstances beyond his control. He was originally joined on his travels by Buz Murdock (played by George Maharis), a friend and former employee of his father, with the character leaving midway through the third season after contracting "echovirus".

Buz made his final appearance in a January 1963 episode and was then written out of the show, and was never referenced again.

Near the end of the third season, Tod met a recently discharged Vietnam veteran named Lincoln Case, played by Glenn Corbett, who followed Tod on his travels and stayed with him until the final episode.

The interest in the show continues today by "Baby Boomers" who remember the original showings, and new generations of viewers fascinated by the show who watch it on DVD.

The Chevrolet Corvette seen in the first episode ("Black November", October 7, 1960) was a 1960 model; a 1961 model was used the rest of that season. Chevrolet supplied Corvettes for the duration of the series, upgrading every season to the latest models.

Since the show was filmed in black-and-white, Corvettes in light colors like Horizon Blue, Cascade Green and Fawn Beige were used. 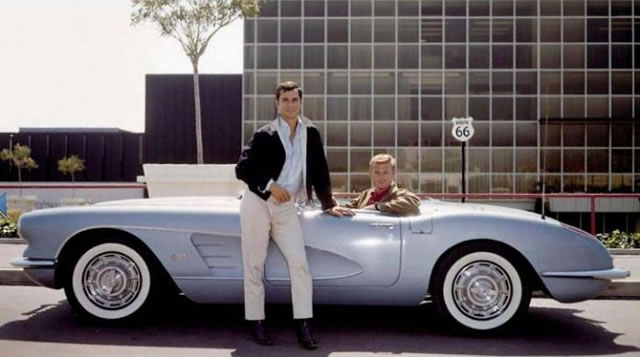 While many viewers assumed the Corvette in the Route 66 TV series was red, it was not.

However, the popularity of Corvette convertibles, especially red ones, lives on! Many actual cars and murals exist today along the old Route 66 depicting those happy days along the Mother Road.

Read more about Corvettes along Route 66

Planning a road trip on Route 66? Here are the travel guides and reviews by state...

The song "Get Your Kicks on Route 66" was composed by songwriter Bobby Troup in 1946.

It was first recorded by Nat King Cole, and sung by other singers over the years including Chuck Berry, Perry Como, and the Rolling Stones.

Now you go through Saint Looey
Joplin, Missouri,
and Oklahoma City is mighty pretty.
You see Amarillo,
Gallup, New Mexico,
Flagstaff, Arizona.
Don't forget Winona,
Kingman, Barstow, San Bernardino.
Won't you get hip to this timely tip:
when you make that California trip
Get your kicks on Route sixty-six.