Road Trip on Route 66 from Seligman to Kingman, Arizona

Route 66 served as a major path for those who migrated west.

One of our favorite segments along the Mother Road stretches 87 miles from Seligman westward to Kingman in Arizona.

Seligman is located on Historic Route 66, between Flagstaff and Kingman, just north of the present-day I-40. It is situated at an altitude of 5,242', and has a population of about 450 residents.

On this leg of Route 66 we will pass through the small towns of Yampai, Peach Springs, Truxton, Valentine and Hackberry on the way.

Kingman is located on Historic Route 66, Interstate 40, U.S. Route 93, and Arizona Highway 68. With its geographical location, it provides access to the gambling destinations of Las Vegas and Laughlin, Nevada, as well as the Grand Canyon, California, the Colorado River, Lake Mead National Recreation Area, Lake Mohave, and Lake Havasu. It also is an Amtrak stop.

Seligman's earlier roots was as a railroad town.

Originally Seligman was called “Prescott Junction” because it was the railroad stop on the Santa Fe Railroad mainline junction with the Prescott and Arizona Central Railway Company.

Today, Seligman is home to numerous gift shops, restaurants and several small motels. It is truly a step back in time!

In 1972, Angel Delgadillo moved his barber shop so that he could take advantage of the traffic on the new alignment of Route 66 through Seligman.

Business was good until September of 1978, when I-40 bypassed Seligman.

To stimulate tourism, Angel, his wife Vilma, and other shop owners in northwest Arizona established the Historic Route 66 Association of Arizona.

The Association was located in Angel's Barber Shop & Pool Hall.

His work helped make Seligman "The Birthplace of Historic Route 66".

We've shopped there, and highly recommend it!

Elvis and friend on a break on Historic Route 66 in Seligman, Arizona 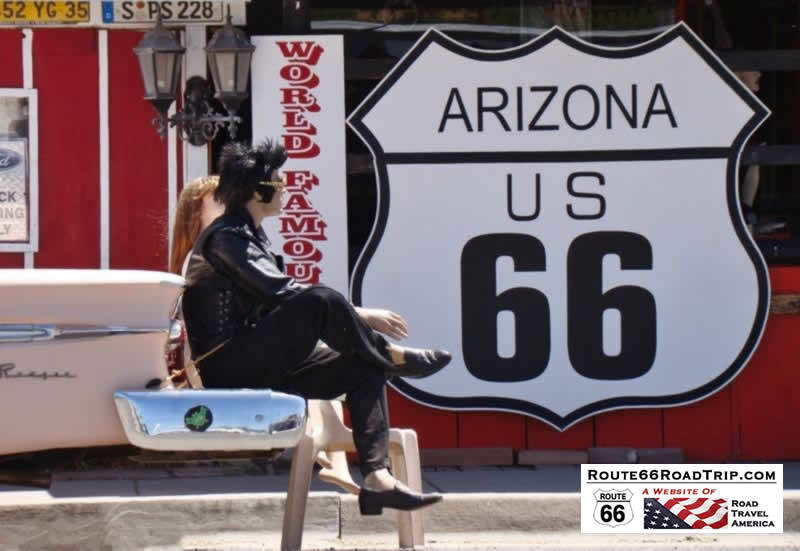 Traveling Westbound on Route 66 from Seligman in Arizona

Heading westbound in Arizona, Route 66 takes a northwestern turn at Seligman, away from today's Interstate 40, and passes through the small towns of Yampai, Peach Springs, Truxton, Valentine and Hackberry.

West of Seligman the road settles into the Aubrey Valley, and then nears Grand Canyon Caverns.

Next up is Peach Springs, a Hualapai Tribe community, and views of the Music Mountains and Laughing Jack Butte. Tours of the Grand Canyon Caverns are located nearby.

The small towns of Truxton, Valentine and Hackberry are next ... be sure to stop at the Hackberry General Store for a drink and Route 66 souvenirs.

The final stretch runs through the Hualapai Valley and southwest into Kingman.

We've been to Seligman on several occasions, and have made the trip to Kingman on the old road. There is typically no traffic, and it is an easy drive.

This is a highly recommended segment of Route 66, where travelers can slow down and sense what the Mother Road was like in her prime!

Quiet scene along Route 66 between Seligman and Kingman, Arizona 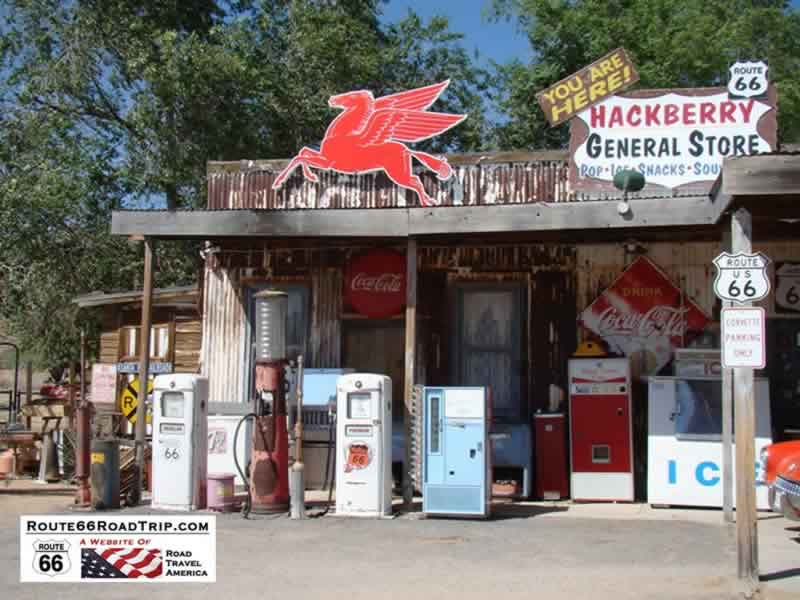 
Arrival in Kingman Arizona on Route 66

The City of Kingman is the county seat of Mohave County, and has a population of about 28,000 residents, while the entire metro area accounts for about 66,000 residents.

With its geographical location, it provides access to the gambling destinations of Las Vegas and Laughlin, Nevada, as well as the Grand Canyon, California, the Colorado River, Lake Mead National Recreation Area, Lake Mohave, and Lake Havasu. It also is an Amtrak stop.

Popular attractions include the Historic Route 66 Museum and the Kingman Railroad Museum.

For aviation fans, make a stop at the Kingman Airport on the north side of town. It is a major airplane boneyard and storage facility for commercial airliners.

The Kingman area is served by about 35 hotels and motels, and over 100 restaurants, diners and cafes.

Travel Guides for Other States Along Route 66

Planning a Road Trip on Route 66? Here are trip planners for all eight states on The Mother Road ...